The concept of the Backloggery started back in 2004. As a life-long gamer, I had accumulated a large collection of games. Looking over them, became frustrated with myself. I had spent so much money on these games and yet many of them had never been finished. But that was going to change! So I buckled down to beat every unfinished game in my collection.

But before that could happen, I needed to make a to-do list. I had to make sure no games were overlooked during this frenzy of smiting evildoers. So I did what any computer geek would do; make an Excel spreadsheet. A needlessly elaborate spreadsheet at that, complete with many features that are still on the Backloggery to this day, including the now familiar Unfinished, Beaten, Completed, and Mastered statuses. Properly armed, I began battling my largest obstacle: the NES collection. Like many other children of the 80's, I had amassed a large number of NES games, including several I had long since decided were impossible to finish. To my surprise, with a bit of determination, those once impossible games started to fall before me.

By that point, I had told my fellow forum-goers of my plans. Some said I was crazy, but others slowly became more and more interested. We started a "Game Accomplishments" thread, which we posted in whenever we beat or completed another title. Encouraging and taunting each other became an important part of the process and helped us stay motivated and focused. Unfortunately, relatively few of the forum users actually participated in this. Like many other forums, the community had grown to overshadow the hobby it was based on. While this isn't necessarily a bad thing, it's a major reason why I have no plans to add a forum to the Backloggery. I want the focus of the site to always be about playing games. Back then, I realized that having a collection viewable online would help keep me focused. I went searching for an online game collection service which would fit my needs. The details weren't important to me, it just needed to be quick and easy to use with a spot to mark if I'd beaten the games. After trying all the major gaming sites, I was appalled. All of the services were the same. Adding games was a painfully slow process of sluggish database searches and reading lists of possible matches. None of them had the one feature I wanted. Annoyed, I decided to make my own website. 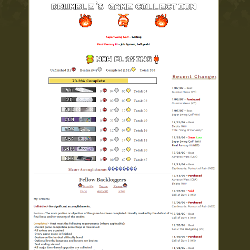 Unfortunately, while I knew HTML, I had never worked with scripting or databases languages. After a few experiments, I ended up settling on a Google Pages site. While it was limiting and a bit clunky to use, it was the quickest and easiest solution I could find at the time. By then, two of my friends, Try4ce and Xavean, had also joined me in my fight against backlogs. Google's built-in page editor made it easy to create a copy of my page for them to use as well. This new system worked well for a long time. Occasionally, someone else would see our pages and want one of their own. When they learned that the pages were updated entirely by hand, most of them lost interest. The ones that did join up made their own pages in their own ways, usually borrowing the graphics we had made. One created his page using PHP, automating the system in several ways. Intrigued, I asked him if I could play around with his code, which he kindly allowed.

After examining the code, I soon realized that creating a proper, user-friendly backlogging website was well within my abilities. At the beginning of 2007, I began grad school. In my free time, I found a free webhost that supported the necessary features I would need to automate my existing site design. While the webhost itself was horrendously slow with large amounts of downtime, it was good enough to try my hand at building an alpha version of the Backloggery. Try4ce, Xavean, and I hashed out the nuances of the layout and design over several months. After switching to a proper webhost, the site finally launched to the public on August 14th, 2007!